Are you looking for an inverter generator from a name brand, but don't want to pay for a Honda? Generac is famous for their industrial generators, and they've been in the portable generator market off and on for the past 50 years. However, since the relaunch of their consumer line in the late 2000s, they've farmed out manufacturing to outside companies. Does that mean their GP2200i inverter generator carries a price premium because of the name, or does their expertise deliver a product that's a cut above generic inverter generators? 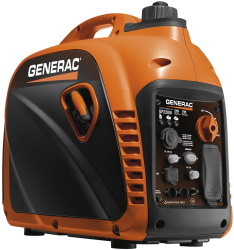 The Basics: Power, Sockets and Dimensions

The Generac GP2200i comes with two 5-20R 120 volt household outlets. They’re duplex outlets, which means you can draw the full 20 amps from one outlet using an extension cable. This portable generator also has a 12 volt cigarette lighter socket and a 5 volt USB Type A socket. Generac includes a cable that lets you use the 12 volt port to charge batteries. The USB socket has a maximum output of 1.5 amps. That’s less than the standard’s 2.1 amp maximum, so you won’t get full charging speed when connecting electronics to this port.

With the 7118 parallel kit, you can connect two identical inverter generators together to get a combined 3,230 watts of power. The parallel cable has built-in L5-30R and TT-30R sockets, making it easy to hook up the generators to an RV for shore power.

The GP2200i is CARB compliant and comes with a spark arrester. This makes it legal in any area that allows generators, including the state of California and wilderness areas with strict fire regulations. An external ground connection can be used with a grounding rod as required to meet local electrical safety regulations.

Like any generator, you want to set up the Generac GP2200i far away from buildings and vehicles to prevent carbon monoxide build-up. The generator’s full power can be transferred using a heavy gauge extension cord.

Unlike most portable generator manufacturers, Generac does not recommend changing the carburetor jets when using this generator at high altitudes. However, you should still expect power to decrease in the mountains, since there is less air for the engine to use to burn fuel.

The Generac GP2200i inverter generator comes packed with a bottle of oil, an oil funnel and a tool kit. This is everything you need for regular maintenance, aside from a wire brush to clean the spark arrester.

The 80 cc engine that powers this portable generator holds 0.36 quarts of oil. Generac recommends SAE 30 oil when operating at temperatures above freezing, 10W-30 below 40°F, and 5W-30 synthetic at all operating temperatures.

The air filter uses a foam element that can be cleaned with soap and water. It does not need to be oiled.

Valve clearance specifications are included in the owner’s manual. However, Generac recommends bringing the generator to the dealer for adjustment.

There isn’t a good way to drain the tank, aside from running the engine. However, Generac says the generator can be stored with stabilized fuel for up to 24 months. That’s far longer than the three month interval suggested by most manufacturers. Untreated gas in the GP2200i should be used within a month of purchase.

The spark plug can be accessed without tools, thanks to a top-mounted hatch that clips into the cover. However, you’ll need to remove a few screws from the side panels to do anything else.

This generator uses a gravity feed fuel system. Opening the vent in the gas cap lets air into the tank, so that fuel can flow into the carburetor. From there, the engine is controlled by a single knob on the front panel. Turning it to “choke” and pulling the recoil starter once or twice should start the engine. One the engine is warm, the knob can be turned to “run.” A light on the panel lets you know when the generator is ready to provide electricity.

The panel also has lights to warn you of an overload or low engine oil. The engine will shut off automatically if the oil level gets too low to prevent internal damage.

Generac doesn’t release noise figures for any of their generators. It’s typical for an enclosed inverter generator with this output to make 56-59 dB of noise at 50% load. The 1.18 gallon (4.5 liter) gas tank can keep this inverter generator running for 10 hours 45 minutes at 25% load, or 7 hours at 50% load. Turning on the Economy Mode switch lets the generator adjust the throttle speed automatically. This minimizes fuel use and noise while providing the power needed for the current electric load.

What Can I Power with the Generac GP2200i?

This is a pure sine wave inverter generator. The inverter smooths out the flow of power coming from the generator before sending it to the outlets. The result is alternating current that is nearly identical to what you’ll find coming from a grid powered outlet. This makes it safe to use the GP2200i to power electronics.

A single Generac GP2200i has enough power to cover most tailgating and camping needs. It won’t be able to power a hot plate or large blender, but it should have no trouble with small coffee makers, slow cookers or LED lighting.

This portable generator can also provide power for tools, but your options are limited. Most bench top tools need more power than the GP2200i can deliver, and even a circular saw may be a stretch. However, it should have no trouble with most hand tools. The power draw for your tools and other appliances can be found on the model label or the owner’s manual.

The Generac GP2200i is covered for two years of residential use, and one year of commercial use.

Generac has a decent sized dealer network. However, owners report problems caused by the relationship between the dealers and the company. Repairs that would normally have a short turn-around time can take weeks due to delays in shipping parts or approving warranty work. However, consumer orders of parts and accessories go off without a hitch.

At first glance, the iQ2000 looks like an upgrade from the GP2200i, despite being an older model. It has a clever digital display that lets you see the current load, fuel level and more. However, once you  look past the display, and you’ll find plenty of reasons to choose the GP2200i over the iQ.

The iQ2000 has a modified wave inverter. That means the AC power coming from the outlets doesn’t make a smooth sweep from positive to negative current. This can cause interference with electronics and burn out components prematurely.

The iQ also has a less sophisticated throttle. Instead of using an eco mode that adjusts engine speed to match the load, the user has to set it manually to one of three positions. That means more noise and higher fuel consumption when in use. Since it can’t adjust automatically to loads, it’s easy to stall the engine by switching on a high draw appliance.

The iQ2000 is also known to have some quality problems, including fuel leaks and front panel light failures. The GP2200i has proven to be far more reliable, with owners logging plenty of trouble-free hours. Even if you’d prefer the digital display on the iQ, you’re better off buying the GP2200i.

Honda doesn’t just have the best brand reputation in the portable generator market, they were the first company to build a portable inverter generator. Generac has been in the generator business longer than Honda, but their portable generator line doesn’t come with the same level of quality and support as their industrial models. The Generac GP2200i inverter generator is one of the most expensive models in this category, but it still costs an average of 30 to 40% less than the Honda. While many consumers may shop by the name alone, what sets these models apart is their build quality and features.

When it comes to connections, the Generac GP2200i easily beats the Honda. Both generators have a pair of household AC outlets. The EU2200i has a T-shaped 12 volt port that can be used to charge batteries with an accessory cable. The GP2200i uses a more common cigarette lighter port, so you can use it for battery charging, powering vehicle appliances and using adapters to add more USB ports. Generac includes a battery charging cable with their inverter generator, while it costs extra for the Honda. The Generac also has a standard USB port.

Read Honda EU2200i Reviews Here
Honda’s parallel cable has no sockets, so the only way to get an L5-30R socket is by buying the GP2200i Companion generator. Generac’s cable has built-in L5-30R and TT-30R sockets, so it will work with most RVs without requiring adapters.

The EU2200i has 100 more rated watts than the Generac GP2200i, giving it an edge for powering large devices. This small amount of power can make the difference when it comes to high draw devices, like RV air conditioners.

Honda’s three year warranty covers both consumer and commercial users, while the Generac GP2200i is only covered for two years of residential use or one year of consumer use. Honda also has one of the largest dealer networks in North America with ready access to parts and service. Honda sells OEM parts through a variety of online retailers, while most GP2200i parts are only available through Generac.

When it comes to reliability and ease of repair, the EU2200i has the clear advantage. However, for many buyers, the Honda’s lack of ports is a major stumbling block. The Generac GP2200i offers all the connection options you may need in a portable generator, whether used alone or as a pair with a parallel connection.
Read More Generac GP2200i Reviews Here

The Generac GP2200i is one of the most useful entries in the inverter generator market. There are few inverter generators available that offer so many ways to connect to appliances. However, you may encounter problems if you need help with repairs or warranty work.