Whether you’re looking for a gas generator replacement, or you’re building a home backup power system, you should take a look at the Goal Zero Yeti 1400 lithium portable solar power station. This portable unit is big enough to replace a small gas-powered generator, making it ideal for tailgating and camping. It’s also compatible with Goal Zero’s home backup products, letting you add batteries, solar panels and a transfer switch to provide emergency power that can be controlled from your phone. 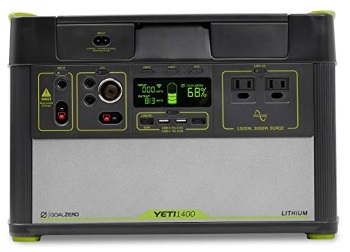 The Yeti 1400 has two grounded three prong AC outlets delivering 110 volt, 60 hZ electrical power at up to 12.5 amps. The battery’s DC power is converted to AC using a pure sine wave inverter, making it safe to use with electronics. The outlets deliver up to 1,500 watts of continuous power and up to 3,000 watts of surge output for reactive loads.

The 1400 has one USB-PD power delivery port. This high output port uses USB communication standards to adjust voltage and charge rate automatically for the device plugged into the outlet. In this form, it supports 5, 12, and 20 volt output at a maximum of 3 amps and 60 watts. There’s also one USB-C outlet that charges at a maximum rate of 3 amps and two USB-A outlets that output up to 2.4 amps.

The battery has a capacity of 1,425 Wh. According to Goal Zero, that’s enough for the following uses.

The lithium ion batteries hold a charge for up to 10-12 months, making it a great choice for emergency power. Goal Zero recommends either leaving the 1400 plugged in or recharging every 3 months to keep the battery healthy.

There are two ways to connect external power to this station. The power pole charging port supports the unit’s maximum 30 amp, 360 watt charging rate at 14-22 volts. The 8 mm charging port is limited to 10 amps and 120 watts at the same 14-22 volt range.

Out of the box, the Yeti doesn’t support car charging, but it can be enabled by installing an expansion module. Keep in mind that the limiting factor is the charger’s high current draw. You won’t be able to depend on your 12 volt accessory port for fully charging the station’s battery in any reasonable amount of time.

Applications of the Yeti 1400

By itself, this station is powerful enough to be used for emergency power. A fully-charged battery won’t keep the average refrigerator running a full day, but it’s more than enough for short term use of smaller appliances, garage door openers, lighting and electronics. It’s also a great option if you need to power all but the most power hungry medical devices.

By adding one of Goal Zero’s expansion modules, the Yeti can be the center of a grid backup system. This device can link the station together with other power units and expansion batteries, creating a multi-cell station. The company also offers a Home Integration Kit that connects the unit directly to the household grid. The 1400 has the same port layout and maximum output as the larger 3000, making it an affordable choice for stationary backup.

The 1400 also has WiFi support. Once it connects to your home router, you can control the station remotely using the Goal Zero Yeti app. This lets you check the current power level and charge level, turn ports on and off, and install over the air firmware updates from your Android or iOS device.
Several devices can be managed from the app, letting you control an entire off-grid system from your phone. Several devices can also access one power station, giving everyone at home a way to check up on the system.

The Yeti’s battery pack is made by combining a series of off-the-shelf 18650 cells and encasing them in a waterproof enclosure. An active cooling system keeps battery temperatures under control, extending the life of the pack. This power station isn’t waterproof, but it should have no problem handling the outdoors.

The Yeti is designed for use at temperatures between 32 and 104°F (0-40°C.) However, Goal Zero says this unit can be used in freezing temperatures if it’s kept in a cooler. The heat from the unit itself will keep the batteries warm, making this a practical option for winter camping.

If you’re comparing this to a gas generator, be prepared for sticker shock: expect this power station and a set of solar panels to be about twice as much as a quality portable generator.

As an off-grid solution, the inverter’s 1,500 watt maximum is going to be an issue for anything larger than a cabin.

The Yeti 1400 is perfect for powering small appliances and a TV for tailgating. It’s too big to carry to remote campsites, but its size is perfect for large base camps, powering equipment and portable appliances.

Looking for an off-grid backup system? The 1400 can be the base for a power station using Goal Zero’s batteries and a Home Integration Kit. However, you’ll run into the limits of its on-board inverter pretty quickly. Built-in app compatibility makes it a compelling option, letting you manage your power station remotely.