Portable power stations are a great alternative to generators, thanks to their flexibility. You can charge the built-in battery using a variety of power sources, including solar panels, vehicles and home outlets. They don’t have an engine, so you can use them indoors, in fire hazard areas, and during quiet hours. Battery power conversion is simple, so these stations have outlets you won’t normally find on portable generators, including USB Type C ports. However, they’re limited by their capacity: while you can always buy more fuel for a generator, charging isn’t always reliable enough to keep the station’s battery topped up. 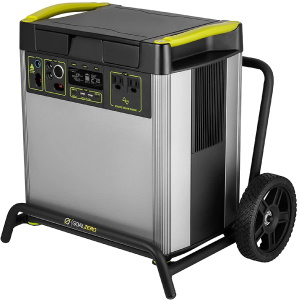 Goal Zero’s Yeti 6000X aims to change this through size. As the name implies, this station has enough batteries to store 6,000 watt hours of electricity, yet it’s about the same size and weight as a medium-sized portable generator. With so much power on hand, it bridges the gap between light, low capacity power stations and heavy, stationary lead acid battery backup power solutions.

While these power stations are marketed as a solution for using solar power, that’s just one of several ways you can charge the battery.
This station will work with any solar panel, as long as it’s connected correctly and doesn’t exceed 50 volts. To get the full 600 watts of charging capacity, you need to use the Anderson Power Pole connector on the front of the station. The 6000X also has two 8mm input ports: one on the front panel, and one under the lid. These are limited to 120 watts each. These three outlets can be used in any combination, making it easy to maximize the charging rate without exceeding the voltage limit.

Goal Zero offers this generator in packages with 400 watts of solar panels. These panels can charge the battery in 18-36 hours, depending on the amount of sunlight available. Add another panel to get 600 watts of charging capacity, and you can charge the battery in 12-24 hours. If you add more panels, you can’t go over the station’s 600 watt charging limit. However, this will keep the charging rate closer to that limit in poor light conditions.

If you don’t want the added cost of solar panels, you can charge the 6000X’s battery from a household outlet using the included 600 watt charger. AC charging a battery from flat to full takes as little as 12 hours.

Goal Zero makes an adapter that lets you charge from a 12 volt automotive accessory socket. This takes 55 hours to fully charge the battery. The company also makes a kit that connects the station directly to your vehicle’s alternator. This is handy for RV installations, letting you top up the battery as you drive.

According to the company, the battery should be good for 500 cycles at 80% capacity. Keeping the station plugged into a power source or recharging it every three months should keep the battery in good condition during storage.

What Can I Power with the Yeti 6000X Power Station?

The 6000X comes with the following ports:

The 6000X has a pure sine wave inverter, so it can power anything, as long as its within the station’s capacity limits. If you’re new to power stations, you should know they don’t deliver power in the same way as a generator. While a generator without an inverter makes “dirty” power that will burn out electronics, a power station with a standard inverter makes alternating current that shifts abruptly between polarities. This type of electricity doesn’t work with electric motors, so you can’t use it with power tools, refrigerators or air conditioners.

This Goal Zero station supports up to 2,000 running watts of power, which puts it in line with a small portable gas generator. However, starting watt capacity is a whopping 3,500 watts. That means you can power high amp tools that would easily overload a regular generator. Also, unlike a generator, you won’t wear out the 6000X if you regularly use it near its output limits.

How long can you power your devices? You’ll still run into the same problems as any portable power solution.  There simply isn’t enough power for the largest, most power hungry devices, including water heaters, electric stoves, or central heat and air. However, there are still plenty of power-intensive and critical appliances you can run with this power station. Here are a few examples:

Swap any of these devices with portable or high efficiency versions, and you can easily double or triple run times. Portable devices like laptops and smartphones can be recharged dozens or hundreds of times. Once you combine all of your appliances, you may find that you have enough electricity for at least a couple days of grid-free power. This makes solar power feasible for unpredictable weather, and it’s enough to cover most power outages.

Need more power? Lift the lid, and you’ll find a place to install Goal Zero’s expansion modules. Using the Link Expansion Kit, you can connect the 6000X to a 2,400 or 4,800 watt hour battery to expand your home backup installation. Goal Zero also has a transfer switch kit, so you can connect your power station directly to your home wiring.

The 6000X has built-in Bluetooth and WiFi connectivity, allowing users to access the power station via Goal Zero’s new Yeti App 3.0. Using your smartphone or tablet, you can check the battery capacity, battery temperature, charge rate and discharge rate. The app also lets you turn ports on and off, and it can send you alerts for overloads, overheating and firmware updates. It also lets you tweak the charge settings, letting you balance speed against battery life. This app is available for Android and iOS.
Don’t want to use your phone to check on your power station? There’s a digital display that shows input, output, battery charge, and estimated time until full charge. Each set of outlets has a physical on/off switch, but you can’t change charging profiles without the app.

The 6000X measures 25 x 20 x 25 inches and weighs 106 lbs. That’s about the same as a 3,500 watt portable generator. The power station has two built-in handles for carrying, and it comes with a rolling cart with an extending handle.

For the most part, these power stations are identical. They have the same ports, the same output, and the same app compatibility. The only differences between these models are the batteries and charging rates.

The 3000X’s battery capacity is half that of the 6000X. Solar and 12 volt charging takes half the time, since there’s half the battery to charge. The built-in AC charger is limited to 230 watts, so it takes 14 hours to reach full charge from a household outlet. Goal Zero offers a 600 watt charger as an option, cutting charging time down to 6 hours.