The Pulsar brand model PG2000iSN is portable inverter generator that can produce 1600 watts of sustained power and peak power output of 2000 watts. It has a number of points in its favor, though it isn’t perfect. In this portable generator review, we’ll look at the pros and cons of this model. We’ll also share a few observations about the model PG2000iSN by Pulsar that aren’t clear pros or cons but might affect someone’s decision to buy it. 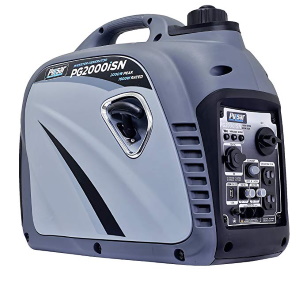 Points in Favor of the Pulsar PG2000iSN Generator:

Some Cons of the PG2000iSN Portable Generator:

This is a powerful, portable generator as long as you keep its limitations in mind. It is energy efficient, lightweight and quiet. It isn’t as high powered as it seems, but it will keep the lights on and run basic tools and appliances. And it can safely charge your mobile device or connect with its twin to power a microwave.