Should you buy a generator powered by gasoline, propane or diesel? While this seems like it should be a straight-forward decision, there are many factors to consider. Generators built for these fuels compete in different markets, so there are features that are sometimes exclusive to one type of fuel. What do you need to consider when buying a generator, so you get something that fits your use case while minimizing purchase, fueling and maintenance costs? 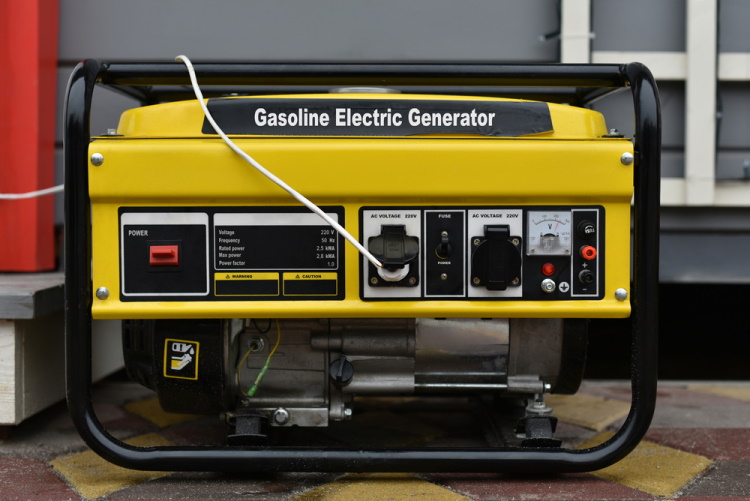 What’s the Difference Between These Fuels?

Gasoline and propane engines use spark ignition. Once the air and fuel mixture is compressed, an arc of electricity from the spark plug ignites the fuel.

Most gasoline and LPG generators use carburetors. Fuel sprays out of a small needle into the intake air. Venturi tubes lower the air pressure, which causes the fuel to mix with the air. Engine speed is controlled by adding or removing air with a throttle valve. Most modern generators link the throttle to a load sensor, automatically adjusting the engine speed to meet power requirements. This conserves fuel and reduces noise, while ensuring you always have enough electricity to keep your appliances powered.

A spark ignition engine can run on either gasoline or propane, as long as the carburetor is set up correctly. However, LPG burns hotter than gasoline. If you run a gasoline engine on propane using a conversion kit, this heat will burn the valves. Propane and dual fuel engines use components that can withstand this heat. Dual fuel generators have carburetor jets for both gas and propane, letting you use either fuel.

Diesel engines use compression ignition. Squeezing the fuel and air mixture heats it until it combusts. This requires an engine with a strong block and head, and a starting system that can overcome compression to turn the engine over. This makes diesel engines heavier and more expensive than spark ignition engines. Engine speed is controlled by changing the amount of fuel entering the engine, not the amount of air. This reduces the number of parts needed to build a diesel engine.

Which Type of Generator Should I Buy?

Once you weigh the advantages and disadvantages of each fuel type, it’s easy to see which fuel is the best fit for your needs.

Best for: Recreational use

Best for: Commercial use

Internal combustion engines make power by breaking the molecular bonds of fuel molecules. LPG has the lowest number of bonds, diesel has the highest, and gasoline is in between. All things being equal, a diesel engine should make the most power from a given amount of fuel. However, you need to take cost and fuel availability into account. Depending on how you use your generator, any of these fuels could be the most cost effective.

Gasoline generators require automotive-quality fuel, so you almost always have to pay the full pump price, including road taxes. There is “farm” or “off-road” gasoline, but it’s hard to find, and usually only available in large quantities. Unless you already have fuel delivered to your farm or business, expect to pay full price for gas. However, it’s also the most accessible fuel. If you’re in an area hit by a major storm, you can probably walk to a gas station to get more fuel. Gas is usually cheaper than road diesel, and, unlike propane, it doesn’t require a special container. This makes it the least expensive option for occasional use.

Off-road diesel doesn’t include road taxes, making it significantly cheaper than on-road fuel. However, it can be hard to buy in small quantities, unless you live in a rural area. The added cost of on-road diesel usually negates the efficiency advantage of these engines. While not as common as gasoline, every town has at least one station that carries on-road diesel.

Once you buy a tank, using propane is rarely more expensive than gas, even though fuel consumption is about 40% higher than gasoline. A dual fuel engine produces 10% less power on propane than it does on gasoline, so the engine has to run faster to generate the same amount of power. On average, a 20 lb. tank will keep a generator running as long as it would burning 3 1/2 gallons of gasoline.

Gasoline generators are available with anywhere from 1,000 to 15,000 running watts. Dual fuel engines cover a similar range, while there are a handful of high output stationary generators that only run on propane or natural gas.

The smallest diesel generators are “micro diesels” designed for RV use. These specialty generators make at least 3,500 watts of power, and draw off the same tank that powers the main engine.

Inverters turn power from the generator into pure sine wave electricity, which is safe to use with any device. “Dirty” unregulated power from standard generators will burn out electronics. Gas and dual fuel inverter generators are easy to find. However, since most diesel generators are designed for powering heavy equipment, inverter models are rare.

If you need multi-phase power 220 volt power, you’re going to need a large diesel generator. 220 volt connections on other generators are single phase, so they only work with large RV air conditioners.

Gasoline degrades quickly, forming gums and deposits that clog fuel systems. Gas treated with a stabilizer only lasts three months, while untreated gas degrades in as little as a month. This can be a major headache for fuel storage and maintenance.

The only limiting factor when storing propane is the tank, not the fuel itself. As long as LPG is kept in a sealed container, it will last forever. Stationary tanks used with large generators typically need to be inspected every decade. Propane also doesn’t leave behind deposits, like gasoline. This makes LPG an ideal choice for emergency generators, since they may go months or years between uses.

Diesel is a combustible liquid, but it doesn’t ignite as easily as gasoline or LPG. This makes it the fuel of choice for worksites where ignition hazards are an issue. When exposed to air, diesel can be a breeding ground for algae. However, modern diesel fuel has additives that limit algae growth. As long as the fuel is kept in a sealed, air-tight container, it should last for years. This makes diesel a great choice for long term backup solutions, and in areas where flammability is an issue.

The largest problem with diesel storage is gelling. Diesel formulations vary throughout the year. Winter formulations are lighter to lower the cloud point, while summer formulas are heavier to increase energy density. If you put summer diesel in storage, it could gel at temperatures as high as 17°F. Any stored fuel should be treated with an anti-gelling agent, so it can be used year-round.

The biggest factor determining noise is construction. The more enclosed the generator is, the quieter it will be, no matter what it runs on.

Since propane and gas engines are similar, they make about the same amount of noise. However, a dual fuel engine needs to run faster to provide the same power when it runs on LPG, making it slightly louder.

Diesel generators run at a lower RPM, which cuts down on noise. Most of these generators also run at a fixed speed. They can’t slow down for low load conditions, but the muffler and sound insulation can be tuned for the running RPM, making the engine quieter. Since portable and trailer-mounted diesel generators are mostly used on farms and worksites, they aren’t heavily insulated, like residential and recreational generators.

As long as the engine is set up correctly, there is no difference between the service life of a gasoline engine and a propane or dual fuel engine. Of course, reliability can vary widely in this category. A no-name two stroke engine won’t last nearly as long as a four stroke built by a reputable manufacturer. Using propane eliminates the stale fuel issues that plague gas generators, making them easier to maintain.

A diesel engine lasts two to three times as long as a quality gasoline engine. Large propane generators use top quality industrial engines, but they still can’t match the durability of a diesel.