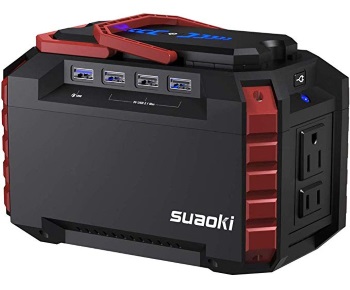 With 10 ports to choose from, there’s space on this portable and compact generator to charge or power just about anything.

The S270 has one grounded three prong outlet with the third prong facing the top of the unit. Below this outlet, there’s a two prong outlet. This arrangement keeps wall warts from covering either plug. Both AC outlets have a maximum sustained output of 100 watts and a peak output of 150 watts to handle reactive loads during appliance startup. That’s not enough power for fridges, coffee pots or other high demand appliances, but it’s fine for smaller devices.

This unit has a modified sine wave inverter, which changes polarity in steps instead of making a clean waveform. This can cause problems when using the AC outlets with battery chargers, electric motors, digital clocks, radios and other electronics. Even if the S270 had a sine wave inverter, you’d be better off using the stations four 12 volt DC ports to directly power electronics. These ports are rated at 15A / 180W max, making them a great choice for portable appliances and lighting.

Where this generator really stands out is its versatility charging via USB. Onboard circuitry automatically adjusts the current, charging batteries at the fastest rate possible. The QC3.0 USB quick-charge port can communicates with compatible devices, varying voltage to charge the battery as fast and as safely as possible. The S270 can send up to 18 watts through this port. There are also three standard USB ports that have a maximum output of 10.5 watts. That means you can charge virtually any portable device at its high speed charge rate including phones, tablet, cameras and drones.

The battery’s power status is shown with 5 LED lights on top of the generator next to the handles. There’s also a built-in dual LED flashlight on one side of the unit.

All this power comes in a surprisingly small package. The S270 measures 7.3 x 4.3 x 4.7 inches and weighs 2.9 lbs. It has two handles on the top which let you carry it like a picnic basket.

The SUAOKI S270 has a built-in Maximum Power Point Tracking (MPPT) solar charge controller. Unlike PWM controllers, it can convert high voltage power into lower voltage, higher watt current to charge the onboard battery faster. The S270 supports solar chargers with outputs ranging from 30 to 100 watts, connecting via an included MC4 cable. The battery management system (BMS) has built-in voltage and temperature controls to maintain battery health when charging or discharging.

SUAOKI’s 60 watt solar charger is made with this unit in mind. It uses monocrystalline silicon panels, the most efficient power generation on the market. These reach a peak efficiency of 20% under 3.8 watt Lux and have a maximum output of 3.4 amps. Under most use cases you can expect to charge the S270 in 7-8 hours.

This charger has an 18 volt DC outlet for charging the S270 and a 5 volt 2.1 amp USB port. Both ports can be used at the same time, letting you charge a mobile device while sending power to the generator. The DC port can also be used directly with an included 10-in-1 connector that is compatible with most brands of PC laptops. There’s also a clamp adapter that can be used to charge a car battery. It’s not enough for off-grid power, but it could keep you from needing to jump start your vehicle. The panel includes SUAOKI’s Target Intelligence Recognition Chip (TIR-C), which adjusts output automatically to safety charge devices.

The unit folds up into a 11.5 x 6.3 x 2.9 inch suitcase-like package with two top handles. When folded out, the charger measures 11.5 x 65.7 inches. You won’t be able to hang the panel off of your backpack for on-the-go charging, but it’s a good size for setting up at your camp. However, output and efficiency come at the expense of weight. At 7.7 lbs, it weighs two-and-a-half times as much as the station it’s powering. While you could use a smaller, lighter charger, you’ll have problems keeping the S270’s large battery fully charged during multi-day trips.

This generator has two more charging options, letting you top up the battery before your next excursion. When connected to a 120v household outlet, the S270 reaches full charge in about 8 hours. SUAOKI also includes a 12 volt car accessory outlet adapter, which can charge the battery in about 11 hours.

Limitations of the S270

While it fits its niche as a base camp power solution, it doesn’t stretch well into other rolls. Together, the S270 and recommended solar charger weigh 10.6 lbs. This makes it impractical for long hikes. Still, this is about the most portable power solution available if you need 120 volt outlets. It’s perfect for carrying a short distance, or packing in an off-road vehicle.

Despite the outlets, this is not a good choice for backup or off-grid power. The modified sine wave inverter keeps it from being used with AC electronics and chargers, and available power is limited. However, it will work in a pinch for natural disasters, keeping cell phones and radios charged.

If you’re looking for a compact solar powered generator that works with a wide range of devices, the S270 is perfect for your needs. A combination of advanced charging circuitry and a variety of ports lets you use it for everything from drones and action cameras to coolers.

This makes the S270 is a great choice for camping or remote filming, keeping devices charged and providing power for lights and small appliances at night. It’s also ideal for road trips, letting you charge the battery in your vehicle or at hotel rooms, then using the solar panel to top up the battery on excursions.