Is two better than one? When you link two generators together using a parallel connection, it might be. Splitting power generation gives you more options for managing noise, reliability and portability. Here’s how parallel connections work, and why you might want to use two connected generators instead of one large generator. 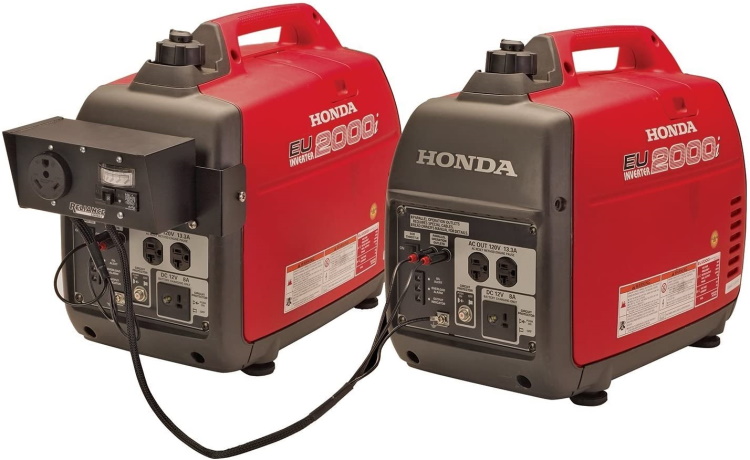 What is a Parallel Connection?

This connection links the power systems on two generators. This creates a single power source with the total output of two generators shared across all of their outlets.

Why Would I Want to Run Generators in Parallel?

It may seem like using one large generator is a better choice than two small ones. However, there are many reasons to use this setup.

It’s easier to move and store two small generators instead of one large generator. A 4,000 watt class portable generator will either be built into a rolling cart, or require two people to lift. A 2,000 watt class generator is small enough for one person to lift and carry. Some parallel cables have built-in high amperage outlets. This lets you use two small generators for RV shore power or home backup connections. If you don’t have storage space for a cart-mounted generator, this is probably your best solution.

Splitting your power source between two generators gives you more flexibility. For example, if you have an RV, you can use a pair of generators to make the electricity you need for high demand devices, like the air conditioner. If you’re spending the day under the awning having a barbecue, you can use just one generator for your outdoor appliances. Taking your tow vehicle off-road? You can bring a single generator with you to use when you stop to eat or camp.

Already own a generator? If you’ve outgrown it, it’s usually cheaper to by an identical model and a parallel kit than buying a larger generator.

Which Generators Can I Connect to Each Other?

In the past, you could only connect identical generators to each other. While that is still true for most models, there are companies that have parallel systems that work with a range of models with similar outputs. These generators have extra circuitry to handle load leveling. This maintains a balance between the larger and smaller generators in the circuit, making the larger unit handle more of the load. Otherwise, the generators would share power generation equally, limiting total output to twice that of the smaller generator. Check your operator’s manual or the manufacturer’s website to see which models you can combine.

There is one notable exception: Honda Companion generators. These generators are built specifically for parallel power generation. Instead of making a parallel cable with a high amp outlet, Companion generators have this outlet built in. They’re designed to pair with the standard versions. For example, by linking an EU2200i with an EU2200i Companion, you have access to three household sockets and one 120 volt, 30 amp outlet. If the Companion is used by itself, only the single household socket is active.

Generators in a parallel connection must have inverters. Technically, it is possible to link two non-inverter generators. However, standard generators only have crude systems to regulate voltage, requiring added circuitry between the two units. Even with this circuitry, power delivery can go out of balance. The inverter balances current flow automatically, and can bring current flow in line with the other generator automatically.

How Much Power Can I Get from a Pair of Connected Generators?

How Do I Get Power from My Parallel-Connected Generators?

NEMA connectors use a labeling system that lists the connector type, followed by the amps it supports. For example, an L5-30R socket can handle up to 30 amps. In most cases, you won’t be able to draw all the power available from a single socket, even if it’s a high amp socket built into the parallel cable.

You can access the full power of your setup by connecting to several outlets. However, there’s something else you need to consider. Most generators have 5-15R or 5-20R household outlets wired in duplex. That means two sockets share the same 15 or 20 amp circuit. In most cases, you’ll want to use extension cords to put distance between you and your generator. Make sure you’re plugging in your cables to different circuits.

If you’re powering an RV, you can use the high amp outlet for shore power, and connect a couple appliances directly to the generators’ low amp outlets. Need to power a tailgate party or a campsite? Get a breakout extension cord that plugs into the high amp outlet and gives you multiple household outlets to connect to. Pair this with another extension cord or two that connects to the household outlets on the generator.

Can I Use Parallel Generators for Home Backup?

Yes. You just need to connect the high amperage socket to a transfer switch. This switch separates your home’s wiring from the grid, so the generator can’t send electricity through the power lines. Transfer switches are legally required for all generator setups that feed into home wiring, and they must be installed by a licensed electrician. Otherwise, you could send power through a damaged line, electrocuting a line worker.

As with any connection to your home wiring, you need to use an external ground. The grounds on both generators are linked in a parallel connection, so you only need to install one grounding rod.

How Do I Connect Two Generators Together?

All you need to set up a parallel connection are two compatible generators, a compatible parallel cord and a Phillips head screwdriver.

The parallel cable has connectors for hot, neutral and ground wires. The hot and neutral wire connectors are usually identical. You don’t want to mix these connections, so most manufacturers either put a clear label on the connectors, like “right” and “left,” or color code the wires and sockets. The ground wire usually has fork connectors that are held onto the generator’s ground connection by Phillips head screws.

Once the generators are connected, start the engines on both units, and let them warm up. Once they’re ready to supply power, you can connect them to your devices. Eco throttles adjust the engine speed automatically to match load. The throttles on both generator need to be switched to the same setting. Otherwise, the generator with the eco throttle on will have trouble with load balancing, since the generator running at full throttle will always make 100% power.

How Do Parallel Connections Work?

You don’t need to know how they work to use generators in parallel. However, understanding a little about alternating current makes it easier to understand why there are so many requirements for making a successful connection.

First, you need to understand how alternating current (AC) electricity works. An alternator has a set of magnets that pass by copper wire. These magnets have two poles. The negative pole pushes the electrons in the wire away from the magnet, and the positive pole pulls the electrons in the wire toward the magnet. As the magnet spins, the electrons move back and forth, swinging between positive and negative current flow. The movement of electrons creates current, which does the work in the electrical system. The force of the magnet changes as it switches sides. As one pole moves away from the wire, the electrons slow down. As the next pole comes closer, the electronics speed up, moving in the opposite direction. If you connect an oscilloscope to one of the outlets in your home, you’d see this push and pull show up as a sine wave. This is the current swinging between positive and negative polarities.

In North American AC systems, this switch in polarity happens 60 times per second, or a rate of 60 Hz. The force of the current is measured in voltage. North American systems run at 120 volts. This voltage isn’t constant. Instead, it’s the amount of volts at the peak of each swing in polarity. With each switch, the current flow goes from 120 volts to -120 volts and back again.

Portable generators also have alternators, because they’re more efficient at making power than DC generators. In standard generators, the power from the alternator goes directly to the outlets. Engine speed fluctuations and electrical interference from sources like the engine’s spark ignition distort current delivery, creating “dirty” power. An inverter generator decouples power generation from power output. Alternating current from the alternator goes to a rectifier, which converts it into DC power. This direct current power flows in one direction without fluctuations. This electricity goes through the inverter, which turns it back into regulated AC power. The result is electricity that is nearly indistinguishable from what you use at home, down to the smooth switch between polarities.

How Big of a Difference Does Using an Inverter Make to Power Output?

Using inverters solves many of the problems of linking two alternating current systems. Since the power is tightly regulated, both generators output almost exactly 120 volts at a rate of almost exactly 60 Hz. However, they aren’t necessarily doing this at the same time. If one generator is in its negative phase, and the other generator is in its positive phase, the different currents will counteract each other, lowering the maximum voltage. The circuitry in the inverter regulates current automatically. Together, the inverters on both generators will alter the frequency changes until they're identical, syncing the switch between negative and positive current flow.

Can I Get 240 Volts from a Parallel Connection Between Two 120 Volt Generators?

No. To get 240 volts of AC power from two 120 volt sources, those sources would need to be wired in series. This doesn’t just require a different wiring setup. It also requires both power sources to be identical, since there isn’t a good way to sync them.

Does Running Two Generators in Parallel Damage Them?

No. As long as you’re using compatible generators with the correct cable, they will be able to sync themselves.

Does a Parallel Connection Also Link DC Power Between the Generators?

No. 12 volt and USB outlets get electricity from an AC to DC rectifier connected to the inverter. While it’s technically drawing from the AC power available across the entire electrical system, the power demands are almost negligible. You won’t be able to draw more power or charge devices faster using these outlets in a parallel-connected system.

What Should I Avoid When Setting Up a Parallel Connection?

You can find all kinds of non-factory approved methods for connecting generators on the Internet. Before you try any of these, you need to ask yourself, “Is it really worth the danger, when I could just buy the right equipment?” Here are the most common hacks you’ll come across, and the reasons why you shouldn’t attempt them.

Does this seem like a lot to take in? When you shop for your next generator setup, just keep these factors in mind: