Home backup and RV shore power solutions can be massive, but the Westinghouse WGen7500 manages to strike a balance between power, size and usability. It has plenty of outlets to connect appliances, while features like remote start and starter battery charging make it easy to use. Its weather-resistant sockets also make it a great choice for workplace power. 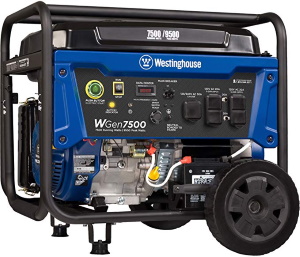 What Can I Power with this Generator?

The L14-30R socket is mainly intended for use with RVs for shore power. If your rig uses a TT-30R connection, it can easily be converted to L14-30R with an adapter. Westinghouse offers an extension cable that plugs into this outlet and ends with four 120 volt 5-20R outlets.

The 5-20R outlets on the front panel are wired in duplex. That means each pair of sockets is limited to 20 amps. These are the same outlets used for home appliance power.

Despite its size, this portable generator doesn't come with a pure sine wave inverter. Westinghouse claims 23% harmonic distortion, which is well beyond the 5% maximum recommended for electronics. These power fluctuations will burn out sensitive circuitry. However, appliances will have no problem running on power from this machine.

The extra 2,000 watts of peak power help the generator handle reactive loads. When electric motors start, they need more power than when they're up to operating speed. The amount of power draw isn’t always clear on these motors. A good rule of thumb is to add 20% more power than rated for small devices like drills. Large devices like air conditioners and air compressors may need up to 250% more power to get started.

What kind of performance can you expect in real-world use? For home backup power, this portable generator won’t be able to run an air conditioner or a furnace fan. However, it does have enough power to keep your refrigerator running as well as some small appliances.

For shore power, the L14 plug can provide enough power for a small to medium-size RV, including an air conditioner. You won’t want to power your TV or other electronics from this generator, but it will have no problem keeping your kitchen appliances running.

This portable generator also comes with a cable for 12 volt DC charging. It can’t directly power your RV’s DC system, but it’s handy for recharging deep cycle and starting batteries.

The 120 volt outlets have GFCI protection to prevent shorts, and all outlets have rubber covers to protect them from moisture. This makes the Wgen a good choice if you need plenty of power for work or tailgating.

Setting Up This Generator

To get this portable generator running out of the box, you'll need a 10mm wrench and a Phillips head screwdriver. Westinghouse packs the WGEN7500 with a starter battery, engine oil and an oil funnel. Assembly is straight forward: Install wheels and feet, add engine oil and fuel, and connect the battery. You may need a hand tilting the generator on its side to install the wheels. The remote is paired to the generator from the factory.

If you plan on using your generator at altitudes over 2,000 feet, you'll need to install a high altitude kit. This includes a carburetor jet sized to match the available air. The smallest of the four jets works at altitudes as high as 7,000 feet. While Westinghouse doesn’t dissuade owners from using this portable generator above this altitude, they do say performance will be severely limited. Even with the right jet, expect the generator to make 3.5% let power loss for every 1,000 feet above sea level. Westinghouse will not honor their warranty if the generator is used with the incorrect jet.

If you want to use this generator for home backup power, it must be wired into a transfer switch by a licensed electrician. From the factory, this portable generator is grounded to frame. Using the ground connector, a grounding rod with a 10 gauge or larger wire can be connected to meet home power and workplace safety requirements.

As part of the home power installation, the generator will be converted from a neutral ground to a floating ground. Only one wire needs to be connected to switch back to a neutral ground for mobile power.

The VFT display on the front panel has an hour meter, making it easy to keep track of maintenance. It also lets you check the current voltage and frequency, which is helpful for troubleshooting. Most maintenance is simple enough to do at home:

The wheels are solid plastic, so they don’t need to be aired up.

Westinghouse recommends having a professional check the valve clearance and idle speed every year or 300 hours, and check the fuel filter every 6 months or 100 hours. If you're experience with working on small engines, you can adjust the valve lash yourself using the instructions in the owner’s manual.

There are two ways to keep the starter battery charged. Running the generator every 2-3 months for at least 15 minutes is enough to keep the battery topped up. There’s also a charging port built into the main control panel, letting you charge the battery directly from a 120 volt household outlet. Charging a flat battery this way takes about 8 hours.

To prevent carbon dioxide buildup, the generator needs to be at least 15 feet away from buildings.

The remote can start and stop the engine, but you'll want to make the first start at the generator. The fuel valve needs to be opened and the engine switch set to “Run” before the engine will fire up. From there, the remote can be used to turn the generator on and off when you need to refuel. It works up to 327 feet (100 meters) away. The engine needs to run for a few minutes to warm up before use. If the oil level is too low, the engine shuts off automatically, preventing damage to the generator.

If the starter battery is dead, the engine can be started manually. The choke is electronically-controlled, but it can be closed by hand before starting.

Westinghouse advertises this portable generator as having 16 hours of run time from a single tank of gas. However, this rating is at 25% load. Under 50% load, the test most manufacturers quote, the 6.6 gallon fuel tank can keep the generator running for 11 hours. A fuel gauge on the control panel makes it easy to keep tabs on the fuel level.

A partially-enclosed design reduces noise without adding a lot of weight. Westinghouse says the WGEN 7500 makes 73 dB of noise, but again, this is at 25% load, not 50%. Expect noise with a 50% load to be closer to 80 dB. This makes the generator about as loud as a vacuum cleaner.

Westinghouse guarantees this generator for 3 years or 1,000 hours of residential use. Commercial operators are covered for one year or 1,000 hours.

If you want a portable generator that is big enough to power your home or RV, but don’t want to deal with a heavy V-twin powered machine, the Westinghouse Wgen7500 may be just what you need. It also has the size and weatherproofing to make it a good fit for outdoor uses including tool use. However, if you need to power electronics, you should skip this model and get a generator with a pure sine wave generator. If you want to see some other options for portable power you could check out our reviews of the best portable generators on the market.

Pros :
- Has enough power for RV and home backup without being too heavy
- One of the few models on the market that have remote start
- Comes with wheels, a handle, a battery charging cable and a funnel, extras that are sold separately for most generator models
- Rubber outlet covers and GFCI circuits improve outdoor safety