What can you power with a 3,500 watt generator? For many consumers, this is the sweet spot for convenience and capability. 3,500 watt generators are big enough that they often have built-in wheels and a handle, but they’re still small enough that they can be lifted by two people. You can get one that’s fully enclosed to cut down on noise, or save some money by getting an open frame model. Want to get an inverter generator? These are the largest models on the market. 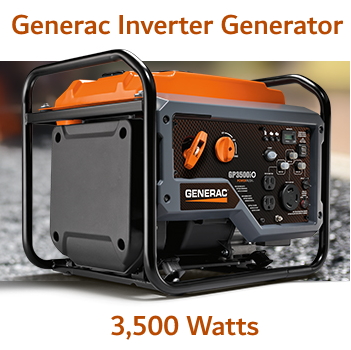 Before you buy one of these generators, you need to consider how it fits your needs. There are several things to consider, including the appliances you use, your operating conditions, and the output you can expect from the generator in real world use.

How Much Power Can I Actually Get from a 3,500 Watt Generator?

There’s more to power output than a single specification. When you buy a generator, there are several factors to consider, including noise, durability and how power output is quoted.

First, you need to check the type of output listed by the manufacturer. Some companies market their generators by their sustained output, while others market them under peak output. Sustained power is the maximum amount of electricity the generator makes during regular operation. Peak output, also called “surge power,” is limited to about a minute. This temporary boost in power is used for reactive loads, which require more power to start than to run.

Running at maximum output all the time is hard on the generator, significantly shortening its life. Manufacturers generally recommend limiting current flow to no more than 85-90% of the generator’s capacity. In practice, most users need far less power than their generators produce in regular operation, with brief spikes in electricity demand. For example, if you’re cooking in an RV or at a tailgate party, you may have a coffee maker or an electric grill running, occasionally switching on a blender or a mixer.

Dual fuel generators are popular for RV shore power, because LPG is inexpensive, and you can switch to gas if propane isn’t available. However, since propane is less energy dense than gasoline, it lowers engine output. While running on LPG, expect both maximum surge power and sustained output to fall by 10%.

Do you live in an area with high elevation, or enjoy traveling in the mountains? Lower air density decreases engine power, which limits electricity generation. Quoted output is measured at sea level. On average, power output decreases by 3% for every 1,000 foot increase in elevation. It’s not uncommon to find RV parks in the Rockies with elevations above 8,000 feet. That equates to a 24% reduction in power. If you regularly use your generator at high elevations, you also need to install a high altitude kit. This kit includes smaller carburetor jets to compensate for the lack of air.

Worried that your generator might be too loud? Want to limit your fuel consumption? Quotes for fuel and noise output isn’t standardized across the industry. Depending on the manufacturer, this might be quoted at 25% or 50% load. Measurements at 50% better reflect real world use. Distances for sound measurements also vary, ranging from 10 to 30 feet. Check the test specifications to make sure you’re doing an apples to apples comparison between models. All things being equal, a large generator makes less noise and often uses less fuel than a smaller one producing the same amount of power.

Do I Need an Inverter Generator?

Grid power alternates between positive and negative polarity 60 times per second. This switch is gradual. If you measure this switch using an oscilloscope, you will see a smooth sine wave.

A standard generator makes electricity by spinning an alternator. Power from the alternator goes directly to the generator’s outlets. Due to engine speed fluctuations and electrical interference, this power is “dirty.” The switch between positive and negative polarity has peaks and valleys, causing harmonic distortion. While this isn’t a problem for electric motors or heating elements, it’s hard on electronics.

An inverter generator converts the alternator’s power into direct current, then back to alternating current. This filters out interference, creasing a smooth switch between polarities, just like grid power. An inverter generator is recommended for powering electronic devices, including TVs, computers and battery chargers.

How Do I Figure Out How Much Power I Need for Appliances?

Most appliances have a tag that states the power requirements, and this information is usually repeated in the index of the owner’s manual.

To get the most accurate answer, connect your appliance to an electricity usage monitor. This device plugs in between the appliance and the outlet. It has a display that shows you exactly how much power is passing through the receptacle.

What can you do with a generator this size in common use cases? Here are some examples of places you may use a 3,500 watt generator, and what you can power with one.

Do you just want a way to power your mobile kitchen, and maybe a few electronics? While this end of the market is dominated by 2,000 watt fully-enclosed generators, stepping up in size gives you a lot more options for appliance power.

This is the smallest generator category that makes sense for use as a backup for grid power, but only for specific use cases. This generator must be several feet away from your house to prevent the buildup of carbon monoxide. If you run it next to a window or in your garage, you can trap this deadly, odorless gas, which can cause asphyxiation and death. With just 3,500 watts to deal with, there are two ways to get power from your generator into your house: run a heavy duty extension cable to one room of your home, or connect the generator directly to your home wiring using a transfer switch.

No portable generator has enough power to keep your central air or heating system running. However, 3,500 watts is enough to run the essentials. Plan on using at least 700 watts to keep your refrigerator running, plus another 700 watts of surge power to start the refrigerator’s compressor. Window air conditioner units use an average of one watt per 10 BTU, or between 500 and 1,500 watts, depending on the unit’s size.

A modern LCD TV uses between 50 and 150 watts, depending on its size. OLED screens require more power, but most TVs use between 100 and 150 watts. A Blu-Ray or DVD player needs 300 watts of power, a cable or satellite box needs at least 200 watts, and game consoles use anywhere from 50 to 250 watts.

Desktop computer power consumption varies widely depending on the components it uses. A low power computer may use just 50-100 watts, while a gaming PC can use upwards of 800 watts. Laptops use anywhere from 25 to 200 watts when plugged into an outlet.

RV appliances and air conditioners are far more efficient than household devices. For small travel trailers and Class B RVs, a 3,500 watt generator is enough to cover most light use cases. The main determining factor is the air conditioner, since this is the most power hungry device in these rolling homes. A single A/C unit needs between 1,100 and 3,500 watts to start and between 300 and 1,700 watts to run. While small RVs and trailers have single A/C unit, Class A RVs and some fifth wheels use two or three units.

Refrigerator power usage varies widely, from 600 watts of starting power and 300 watts of running power for a dorm-sized fridge up to 1,800 starting watts and 1,200 running watts for the largest RV refrigerators. While you might be able to run a small hot plate or grill, a stove will probably draw too much power. However, microwaves use just 600-1,200 watts, giving you plenty of cooking options on generator power. Toasters have a similar range in power use. A large drip coffee maker tops out at around 1,800 watts, while single cup makers only use 650-900 watts. However, pod coffee makers use an electric motor during the brewing process, creating large load spikes.

An RV clothes washer uses between 1,000 and 1,500 watts. The drying mode on a combination washer/dryer uses close to 2,000 watts. Other appliances and electronics use as much power as their household counterparts.

You can’t power a welder, table saw or air compressor with a generator this size. However, it’s more than enough for common power tools: