What can you power with a 2000 watt generator? The answer isn’t as straight forward as you may think. There are several factors to consider, including the generator’s actual output, its electrical connections, and how it delivers that power. Here’s everything you need to know about this popular category of generators and how they may or may not fit your needs. 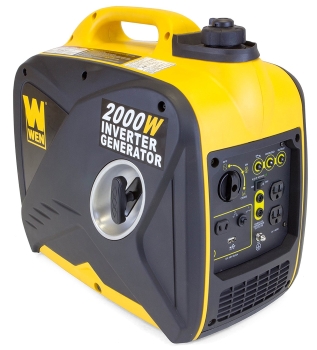 Practical Uses of a 2000 Watt Generator for :

Yes and no. There are several factors at play that determine the actual output, as well as the load you will want to put on a 2000 watt generator in day-to-day use.

The advertised maximum output for most generators is usually the surge or starting output. This is the most power the generator can produce over a short period, typically 30 seconds. Sustained output is typically 20% lower than surge output, so a “2000 watt” generator really makes a maximum of 1,600 watts of sustained power. However, surge output is still important. Electric motors are “reactive” loads, which means they need a lot more power to get started then they need to run. Surge output provides the brief boost needed to get these appliances going. Electric motors are found in a wide range of devices, including air conditioners, refrigerators, power tools and kitchen appliances. To estimate your total surge output needs, combine the power draw from your most power hungry device to your total average load.

Advertised power output for dual fuel generators is based on using gasoline. Propane is less energy dense, so the engine produces less power on this fuel. This reduces the generator’s maximum output. Expect to get about 10% less power running on propane than you’ll get from gas.

Keeping your generator running near its peak capacity all the time wears it out faster. Most manufacturers recommend keeping generators below 90% of their maximum output to extend the life of the engine and other components. With a 2000 watt generator, that leaves you with 1,440 watts of usable, sustained power.

Engine load also has a major effect on noise, so you may find that you want to limit your power usage to keep the generator quiet. Noise levels are usually quoted at 50% load. Expect most generators to be at least 5 dB louder at full throttle, which will definitely be noticeable. Some 2000 watt generators have a smart throttle, which automatically adjusts engine speed to match load. This keeps the generator as quite as possible, but some models can only use this feature with low load conditions.

Total power is just one part of the equation. To get power from a 2000 watt generator, you also need to consider the limits of the electric sockets and the power demands of your devices.

Your generator is rated in watts, just like a light bulb. However, outlets and some appliances are rated in amps. These formulas let you convert watts to amps and vice versa:

Using the second formula, we find that a 2000 watt generator outputting 120 volts provides 16.66 amps of power. However, most generators deliver power at multiple voltages. This includes 120 volts for household appliances, 12 volts for DC charging, and 5 volts for USB connections. Changing the voltage also changes the amps. Using 12 volt sources, this 2000 watt generator provides 166.66 amps of power. At 5 volts, it makes 400 amps. For all three voltages, you may find the limit isn’t the generator itself, but its sockets.

A NEMA 5-20R outlet, the type used for household AC power connections, has a rated maximum of 20 amps at 125 volts, while a 5-15R outlet is limited to 15 amps at 125 volts. However, the circuitry in your generator may have a lower power limit. For example, WEN’s 56200i 2000 watt generator has a 5-20R outlet  that is limited to 13.3 amps. That means the maximum output from these outlets is 1,662.5 watts, well below the generator’s 2000 watt limit. 5-20R and 5-15R outlets are wired in duplex, so they have two sockets that share the same power limit. If you’re using an extension cord or power strip, you can get the connection’s maximum output from just one of these sockets.

TT-30 and L5-30 locking plugs both have a 30 amp maximum. These usually aren’t de-rated in small generators, so the actual limit is the generator’s maximum output. In other words, you can draw 100% of the generator’s power through one socket. While these plugs are usually used in RVs, there are extension cords available with 5-20R sockets on the end. This is handy for running a single cable from your generator to your campsite, work station, or tailgate party.

What Can I Realistically Power with a 2000 Watt Generator?

It’s easy to over or underestimate the total power you actually need. You probably won’t be running all of your appliances at the same time. If you have an appliance with a large reactive load, you can plan around its use, shutting down a few devices beforehand. Likewise, choosing the right appliances can cut power usage significantly. For example, using a thermal carafe lets you shut off your coffee maker after brewing and still have hot coffee.

It’s not a good idea to run appliances that use your generator’s maximum output by themselves. Loads may be higher due to wear and tear on the device, while your generator will struggle with huge spikes in power demand. Be wary of claims that a 2000 watt generator can power a large air conditioner by itself.

If you want the most accurate measurements, you can test your appliances using an electric usage monitor. This device plugs in between the outlet and the plug, showing you exactly how much power is being used by the appliance. Don’t want to test everything you own? These estimates will give you an idea of what you can power with a 2000 watt generator in real world situations.

A coffee maker uses anywhere from 600-1,200 watts continuously, depending on its size. Small coffee makers use the least power, with one notable exception. Pod-based coffee makers, like those from Keurig and Starbuck’s Verismo line, use just 200-400 watts, but they have a surge load as high as 1,500 watts.

Microwaves need 40-50% more power than their heating watt rating. That means a 600 watt oven needs around 1,000 watts, while a 1,000 watt oven needs almost 2,000 watts. Most other cooking appliances, including toasters and hot plates, need anywhere from 750 to 1,500 watts. A slow cooker only needs around 250 watts. If you want to use a 2000 watt generator for tailgating, use gas-powered appliances where possible. This frees up more power for TVs and other appliances.

A standard blender or hand mixer uses 400-1200 watts to start, and around 400-600 watts to run. However, large commercial blenders and stand mixers draw more power at startup than your 2000 watt generator can produce.

A household refrigerator uses around 700 watts, but starting the compressor can draw up to 2,200 watts. RV refrigerators usually need 500-600 watts to start, and around 200 watts to run.

If you want to power electronics safely, you need an inverter generator. The inverter smooths out power coming from the generator, creating a smooth wave of alternating current. Without an inverter, the current will have frequency dissonance. These power fluctuations will overheat and eventually destroy sensitive electronic components.

An LCD television uses anywhere between 50 and 100 watts. Add another 15 watts for a Blu-Ray player, and 40-150 watts for a video game console. Cable and satellite receivers need 20-30 watts, while streaming boxes need 5-30 watts.

A 1 HP compressor needs 2,000 watts, which makes it impractical to power using a single 2000 watt generator. Large equipment, including table saws and drill presses need upwards of 1,800 watts. Angle grinders need around 900 watts, while jig saws need up to 700 watts. Most hand drills use between 800 and 1,200 watts. A 6.5 HP shop vac uses about 1,500 watts.

Tool battery chargers usually draw just 25-100 watts. That means you can use your generator to keep more battery tools running than their plug-in equivalents.

200 Watt Generator for Other Household Appliances

A ceiling fan needs 1,200 surge watts and 800 running watts, but a box fan only needs 400 watts to start and 200 watts to run. Light bulbs use as many watts as they say on the case.

What if I Connect Two Generators in Parallel?

Parallel connections are a common feature on closed frame 2000 watt generators. Using this connection, power can be shared across two identical generators. This gives you more power with the low noise and portability of a small generator. It also adds some redundancy to your power system. If one generator fails, you still have power available for a few appliances. Some parallel kits have TT-30 and L5-30  locking plug outlets built into the cable, making them easy to connect to your RV.

Running a parallel connection makes the combined power of both generators available to all outlets. In most cases, you’ll be limited by the maximum draw of each socket, not the generators themselves. This gives you enough power to run higher draw devices, or more small devices.

So, What Can You Power with a 2000 Watt Generator?

There's more to using a generator than just plugging in appliances. Keep these things in mind when deciding if a generator this size will fit your needs: