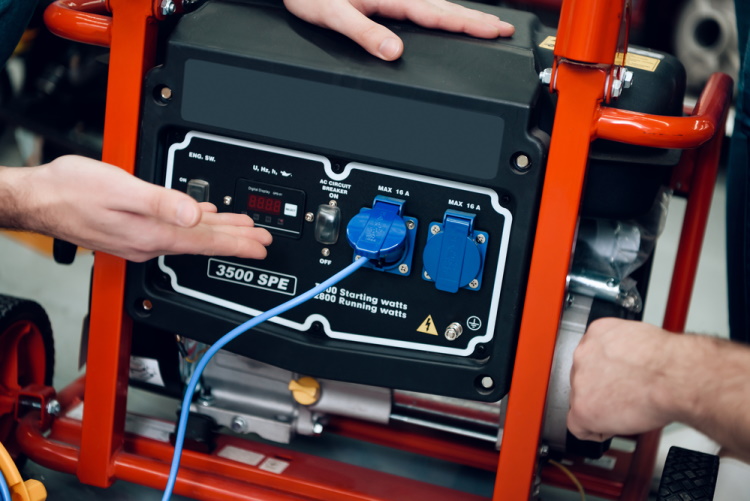 What’s the Difference Between Starting Wattage and Running Wattage?

Electric motors are “reactive” loads. They take two to three times more power to get an electric motor to start spinning than it does to keep running. Electric motors are found in power tools, mixers, blenders, air conditioners and refrigerators. To handle these loads, generators are designed to provide brief increases in output. This maximum output, which lasts a maximum of 30 seconds, is called starting, surge or peak wattage. The amount of power the generator can supply 100% of the time is called running or sustained wattage.

How Much Power Can I Reliably Get from a Generator?

Keeping a generator running at peak output is hard on the components, which can lead to excessive wear and breakdowns. Manufacturers generally recommend limiting output to 90% of maximum load. If you’re going to be near the output limit of the unit you want to buy, consider moving up a larger size generator.

Why and How Does Propane Affect Performance in a Dual Fuel Generator?

Propane is less energy dense than gasoline, so it doesn’t release as much energy when ignited. As a result, dual fuel engines make around 10% less power when using propane. Again, companies advertise the biggest number they can, so you’ll have to dig to find propane output. If you want to avoid the stale fuel problems and higher cost of gasoline by getting something that runs on propane, plan on buying a larger size generator to compensate for lower power output.

How Does Power Affect Noise?

There isn’t one standard way to measure generator noise, but most measurements assume the unit will be several feet away, and it will run well below its maximum output.

When comparing generators, keep in mind that the decibel scale is logarithmic. A 3dB difference is barely noticeable, but we perceive a 10dB difference as being twice as loud. On average, an engine running at full throttle is 5dB louder than one running at 50% load.

Most small and medium size generators sold today have a “smart throttle” or “eco throttle.” When this feature is on, the generator adjusts the throttle speed automatically according to load, keeping fuel consumption and noise to a minimum. However, it won’t work well at high loads. Switch off this feature, and the generator will run at full throttle 100% of the time. Manufacturers typically recommend turning off the smart throttle once the generator is producing at least 80% of its maximum sustained power.

If noise is your top concern, consider using a pair of generators with a parallel connection. Some parallel cables have built-in locking outlets for RV shore power, so you can use a pair of lightweight, quiet enclosed generators instead of one noisy, heavy open frame generator.

What’s the Relationship Between Watts and Amps, and How Does it Affect My Electrical Connections?

To convert amps to watts, multiply amps by volts.

TT-30R, L14-30R and L5-30R locking outlets are all rated at 30 Amps, or 3,750 watts at 125 volts. 14-50R outlets are rated at 50 Amps, or 6,250 watts. If you want to get the full power from a large size generator using these outlets to power appliances directly, you can connect them to breakout cables. These split the power into a series of standard household outlets.

Amperage on 12 volt terminals and car accessory sockets usually isn’t an issue, unless you’re using the connection to charge a battery. Increasing amps increases charging speed. Charging a big deep cycle RV battery can take a couple days with a 2 amp charger, but only 8-10 hours with a 10 amp charger.

Do I Get More Power Using a 240 Volt Connection With My RV?

You may see a difference in output between 120 and 240 volt modes on large size generators, but the difference is caused by a problem with your RV’s distribution panel, not the generator itself.

240 volt power is used almost exclusively to power large RV central air conditioners. To get this voltage, the generator combines two 120 volt sources. If you use the same outlet in 120 volt mode, it sends current through two hot wires. Modern RV control panels tap into one or both of these lines as needed to supply the electrical system. However, some older panels can’t detect and use the second hot wire, effectively halving available power.

Keep in mind that amps, volts and watts are all related. Some manufacturers falsely claim that their generators produce twice the power in 120 volt mode. In reality, the generator produces twice as many amps because the voltage is halved. The amount of electricity is the same.

How Do I Figure Out How Much Power My Appliances Use?

If the appliance is rated in amps, multiply this number by 120 to get the watts. Heat-producing appliances like coffee makers and hot plates may be rated in heating watts. Adding 20% to this number should give you a rough estimate of the power it consumes. This accounts for losses when converting electricity into heat. Microwaves use 40-50% more power than their rated output, so a 1,000 watt microwave will use around 1,500 watts.

Want to take the guesswork out of estimating appliance loads? Some RV electrical control panels have a digital display, showing power demand in real time. This lets you measure the total power draw in your RV with all of your appliances running. If you want to measure a single device, you can use an electricity usage monitor. This device plugs in between the power cord and the socket, showing power draw on a digital display.

Can a Backup Generator Really Power My Whole House?

No. Unless you have an industrial size generator installed at your house, you won’t have enough power for an central air conditioning, and you probably won’t be able to use more than one element on an electric stove. Large size generators may be able to run the igniting system and the fan for natural gas central heating or a gas water heater, but they can’t make enough power for electric central heating or an electric water heater. Also, keep in mind that the largest backup power generators usually aren’t inverter generators, so they can’t safely power electronics.

If you’re planning a new backup power setup, consider what you actually need to survive outages. A small window air conditioner or space heater can keep one room of your house comfortable. You may want enough power to keep your refrigerator running, but you can work around using other high draw appliances, like hair dryers and ovens. This way, you can be more flexible choosing from standby generators, giving you a better fit to survive your next power outage. It’s easier to find a mid-size generator that has an inverter and will work with your home’s transfer switch.

How Much Power Do I Need?

To estimate the amount of sustained power you need, add together the maximum load from all the devices you are likely to use at the same time. To estimate the peak load that will fit your needs, add the largest single reactive load to your maximum sustained load.

Putting it All Together

Getting the right size generator is a matter of balancing power demands against noise and durability. Here’s what you should consider when you’re trying to figure out how big of a generator you need: