There are few things that are worse than needing power and not being able to get your generator running. Is this happening to you right now? Do you want to avoid starting problems? These tips will help you troubleshoot your generator’s engine problems, and keep your engine ready to run when you need power in the future. 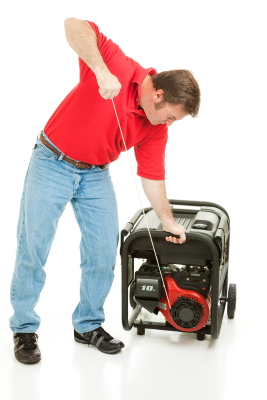 Let’s start with the obvious: did you remember to fill the fuel tank? Did the generator shut off while it was running? Some generators have a built-in gas gauge. It’s connected to a float inside the tank that can get stuck, giving you a false reading. When in doubt, take off the cap and look inside the tank.

How do you check how much gas you have in a propane tank? There should be a pressure gauge on the tank, or integrated into the fuel line. Most tank-mounted valves have clear, color-coded markings for fuel pressure. For line gauges, compare the pressure to the minimum requirements for the engine, which should be listed in the owner’s manual.

All engines burn oil, and air-cooled engines burn more oil than water-cooled engines. Generators run for hours unattended, which makes it easy to run low on oil and ruin the engine. To prevent this, modern engines have oil level sensors connected to the ignition system. When the oil gets low, the sensor cuts power to the spark plug, shutting off the engine. Check the oil level and top up as needed.

The engine needs a rich air/fuel mixture to run when it’s cold, and a leaner mixture when it’s warm. The choke is a butterfly valve with a small hole. Closing the choke restricts the air intake, so there’s less air to mix with the fuel. This gives the engine the rich mix it needs to start. Once the engine is warm, the choke needs to be open to give the engine the fuel/air mix it needs for maximum power. A warm engine will be hard to start with the choke closed.

The choke lever is marked with a symbol that resembles a butterfly valve inside the intake. It looks like two vertical lines with a diagonal line in the middle. The placement of this lever differs from model to model. Some engines have a choke lever between the air filter and the carburetor. Others put the lever on the control panel, or integrate it into the power control knob. If it’s connected to the knob, there’s usually a “start” or “choke” position.

To keep fuel from leaking during transport, many generators have a fuel shut off valve. This valve is either integrated into the control knob, or attached to the fuel line between the gas tank and the carburetor. This valve should have clearly-marked “on” and “off” positions.

Generating electricity during startup puts too much strain on the engine. Be sure to disconnect or turn off electrical loads before starting the generator. Once the engine can run with the choke open, it’s ready to make electricity.

If air can’t enter the fuel tank, fuel can’t get out. This air enters through a small hole in the fuel cap. If this hole gets clogged, the pressure inside the tank will drop until gas or diesel can’t be pulled through the fuel line.

This problem is easy to miss, since opening the gas cap temporarily fixes the problem. When you remove the cap to check the fuel level, the pressure inside the tank returns to normal. Now, the engine starts and runs for a few minutes, until the pressure in the tank drops again.

This is the most common source of starting problems in generators, especially if they’re used for emergency backup. When you go months between starts, it’s easy to let fuel sit inside the generator until it breaks down.

Modern gasoline doesn’t age well, no matter what type you buy. Ethanol is hygroscopic. Over time, it absorbs water from the atmosphere. This dilutes the gas, and causes the ethanol to fall out of suspension. This keeps the fuel from igniting, and can lead to corrosion. However, ethanol also inhibits the formation of gums and varnish. Ethanol-free fuels degrade rapidly, leaving deposits that clog carburetor jets and fuel lines.

With both gas and diesel engines, you can slow down fuel degradation by keeping the tank full. This pushes out air, which contains moisture and oxygen. Both encourage fuel breakdown and biological growth.

For an engine to run properly, it needs the correct ratio of fuel and air. Air gets less dense as altitude increases, so less fuel is needed to get the right ratio. On fuel-injected engine, a MAP or MAF sensor measures incoming air. The ECU uses this measurement to determine how much fuel it should add with the injectors. On carburetor-equipped engines, fuel is controlled by the carburetor jets. If there is too much or too little air entering the engine, the air/fuel mixture can be off enough to keep the engine from running.

To correct for this, generator manufacturers offer jet kits for different altitudes. By changing the size of the jets, more or less fuel is added to the air before it enters the engine. Generators usually ship with jets tuned for sea level operation, although you may get high altitude jets if you live in a mountainous area. If you use jets for a lower altitude, the engine will flood when you try to start it. If you use jets for a higher altitude, there won’t be enough fuel to get the engine to fire up.

Check the condition of the spark plug. A cracked insulator can ground the spark plug to the engine, keeping electricity from reaching the electrodes. Worn and fouled plugs should be replaced.

Vapor lock is when the fuel line gets hot enough to vaporize the fuel inside. This creates a gas bubble that prevents liquid fuel from being drawn into the carburetor. This usually happens after shutting off the generator in extreme temperatures. Now that fuel is no longer moving through the line, it has time to absorb heat rising from the engine. Like water, gasoline’s boiling point gets lower at high altitudes. That means you’re most likely to have issues during a hot summer day in the mountains. Ethanol fuel blends also have a lower boiling point, but the difference between E10 and standard gasoline is relatively small.

There isn’t much you can do to fix this problem, except let the fuel line cool. Try to move your generator to somewhere with shade. If you have a portable fan, have it blow on the fuel line.

All portable generators have a backup recoil starter. However, turning over a big V-Twin is a challenge for the strongest of us. Before you wear yourself out using the pull start, look over the battery and starting system. If you travel with your generator, it’s a good idea to check the connections. Vibrations and bumps can knock them loose, keeping the starter from getting a good connection to the battery.

Starters are not built to run continually. Cranking should be limited to a few seconds at a time, with plenty of time in between to let the motor cool. For example, Honda recommends using the starter for a maximum of 5 seconds, followed by 10 seconds of rest. If the starter isn’t kicking over and the battery is charged, make sure the fuse to the starter relay hasn’t blown.

I Need a Generator I Can Depend On. Which Brands Are the Easiest to Get Serviced?

While these tips will help you fix common starting issues, you may need a mechanic to solve more complicated starting problems. If you depend on your generator for work or travel, it helps to own something that has good support.

No one comes close to Honda’s support. The company has authorized service centers everywhere, and their GX Series engines dominate the commercial equipment market. That means any small engine repair shop should have the skills and parts needed to repair their generator engines, even if they aren’t a dealer. Although Briggs & Stratton’s generators aren’t as popular as Hondas, the ubiquity of their engines gives them a similar advantage.

Are Hondas out of your budget? Fortunately, there are several more affordable brands with great support. Wen, Westinghouse and Champion all have extensive dealer networks, making it easy to get service for their products.